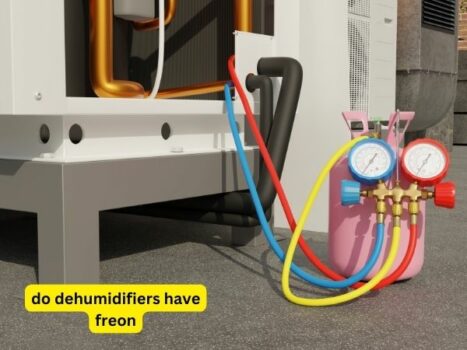 Today we discuss do dehumidifiers have freon or not. Many dehumidifiers use a refrigerant called R-410A, which does contain a small amount of Freon. However, it is an environmentally friendly refrigerant that has been approved by the EPA for use in dehumidifiers and other appliances.

Freon is a brand name for a class of chemicals used as refrigerants. The most common type of freon is called chlorofluorocarbon (CFC). CFCs were once widely used in air conditioners, refrigerators, and aerosol cans, but they are now being phased out because they contribute to the depletion of the Earth’s ozone layer. Newer types of refrigerants called hydrofluorocarbons (HFCs) do not have this problem and are becoming more popular.

freon in a dehumidifier:

Freon helps the dehumidifier cool the coils and condense the water vapor into liquid form. The Freon then circulates back to the compressor where it is compressed and turned back into a gas. This gas is then circulated back through the coils to begin the process again.

freon is used in a dehumidifier nowadays:

Yes, freon is still used in some dehumidifiers. However, it’s being phased out because it’s a greenhouse gas and contributes to climate change. There are now dehumidifiers that use other refrigerants that don’t have this negative environmental impact.

Most types of dehumidifiers on the market use refrigerants like R-134a or R-410A to cool the coils and condense the water vapor. Some units also use a desiccant material to absorb moisture from the air, like silica gel or activated alumina.

causes of freon leakage in a dehumidifier:

The most common cause of freon leakage in a dehumidifier is a crack or hole in the coils, which can be caused by wear and tear over time. If the coils get too dirty, it can also reduce the efficiency of the machine and cause it to work harder, leading to overheating and possible coil damage. Finally, if the dehumidifier isn’t properly vented, it can cause the coils to become frozen and covered in ice, which can eventually lead to a Freon leak.

if freon is a greenhouse gas why does the maker use this in a dehumidifier?

Freon is a greenhouse gas because it contributes to global warming. However, it’s still used in dehumidifiers because it’s effective at removing moisture from the air.

There are other options for dehumidifiers that don’t use Freon, but they tend to be less efficient at removing moisture from the air. So although using Freon is not ideal from a climate perspective, it’s still the best choice for most consumers when it comes to finding a dehumidifier that does the job well.

How do I refill the Freon in my dehumidifier?

The first step is to locate the compressor. It will be located either on the side or on the top of the unit. There is a large black cylinder that will be housed within a metal casing. This is the compressor.

Once you have found the compressor, locate the Freon tubing. It will be coiled around and should be attached to both the compressor and the tank on the dehumidifier. If it is not attached, use pliers to snap it into place.

Next, unscrew and remove the cap from the top of the Freon tank on your dehumidifier. Insert one end of the tubing into the hole on top of the tank and screw the threaded cap back in place to hold it in securely.

type of freon does a dehumidifier use:

A dehumidifier uses R-134a, which is a type of Freon. we know, Freon is a brand name for a group of chlorofluorocarbons (CFCs) used as refrigerants and aerosol propellants. In the past, Freon was also commonly used as an insulator in electrical equipment and appliances. However, CFCs are now known to be harmful to the environment, so they’ve been largely phased out in favor of other refrigerants like R-134a.

The way to identify if a dehumidifier is low on freon:

refrigerant vs freon – are they the same?

dehumidifier desiccant or refrigerant – which is better?

Most Frigidaire dehumidifiers use a refrigerant called R-410A, which does not contain the ozone-depleting substance Freon. However, a small number of Frigidaire dehumidifiers use a refrigerant called R-22, which does contain Freon. If you have one of these models, it is important to have it serviced by a certified technician in order to avoid releasing Freon into the atmosphere.

do Honeywell dehumidifiers have freon?

All Honeywell dehumidifiers use a refrigerant to remove moisture from the air. The type of refrigerant used will depend on the model of the dehumidifier. Some models use R-410A, while others use R-22.

do all dehumidifiers have freon in them?

Answer:
All dehumidifiers use refrigerants to cool the coils and condense the water vapor into liquid form. Some common refrigerants used in dehumidifiers include R-22 (Freon), R-410A (Puron), and R-134A (Atmos). However, not all of these refrigerants are harmful to the environment, and many newer models now use R-410A which has a lower Global Warming Potential (GWP) than other refrigerants.

Answer:
Yes, Freon gas is poisonous. It’s a chlorofluorocarbon (CFC) gas, and it’s been found to contribute to the depletion of the Earth’s ozone layer. Additionally, CFCs are toxic to both humans and animals. Symptoms of exposure include dizziness, headache, nausea, and vomiting. Prolonged exposure may lead to central nervous system damage, respiratory problems, and even death.

is freon a greenhouse gas? is that harmful to the environment?

Answer:
Yes, freon is a greenhouse gas. In fact, it’s about 20,000 times more potent as a greenhouse gas than CO2. And as far as its effects on the environment, well…it just destroys the ozone layer. So yeah, it’s pretty harmful.

Dehumidifiers come in both portable and whole-house varieties. Portable dehumidifiers usually extract moisture from the air using a filter or a sorbent material such as silica gel, while whole-house dehumidifiers work by drawing moist air over coils cooled with refrigerant to condense the water vapor. The most common type of dehumidifier is one that uses a compressor and Freon gas to cool the coils.

Dehumidifiers work best when they have the proper level of freon. If your dehumidifier isn’t working well, you may need to add more freon. Contact a technician if you are unsure how to do this.